Outbreaks of infectious diseases in humans pose a significant challenge to health worldwide, and outbreaks in animals and plants have significant ecological and economic impacts. Accurate real-time forecasts of whether or not initial reports will be followed by a major outbreak are necessary for efficient deployment of control. Modelling is a key tool for estimating the chance of a major outbreak, approximating how widespread the disease is likely to become in the population, and evaluating the likely impacts of different control interventions.

We are currently developing a framework in which, using stochastic models, the maximum number of simultaneously infected individuals over the course of the epidemic can be predicted using data from the first few days of the epidemic. This will allow policymakers to predict whether an invading disease is likely to overwhelm available control resources (e.g. number of available hospital beds), and if so, for the amount of additional resources required to be estimated.

For all infectious diseases, there is a delay between infection and the appearance of symptoms, i.e. an initial period following first infection during which infected individuals remain presymptomatic. We are also using mathematical modelling to evaluate the effect of presymptomatic infection on predictions of major epidemics. We have written a publication that shows rigorously, for the first time, that precise estimates of the current number of infected individuals – and consequently the chance of a major outbreak in future – cannot be inferred from data on symptomatic cases alone. This is the case even if the values of epidemiological parameters, such as the average infection and death or recovery rates of individuals in the population, can be estimated accurately. Accurate prediction is in fact impossible without additional data from which the number of currently infected but as yet presymptomatic individuals can be deduced. A press release from the University of Cambridge about this work is available here and the paper is available here. 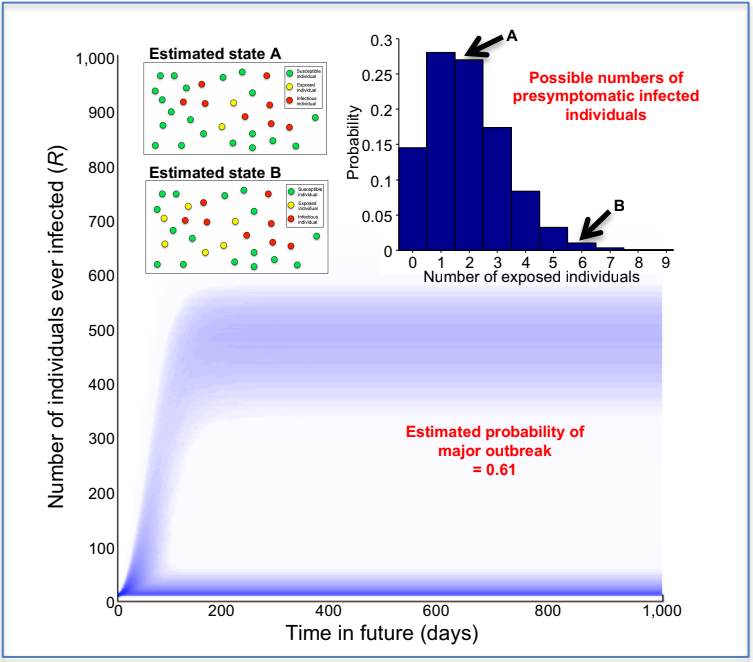